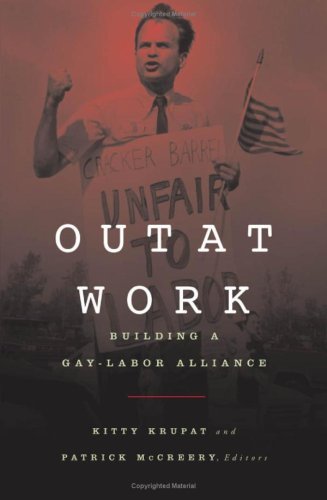 Today in thirty-nine states, employers may legally fire workers simply because they are known or thought to be gay. Clearly, the struggle against workplace discrimination based on sexual orientation has a long way to go. In Out at Work, a distinguished group of prominent gay rights activists, union leaders and members, policymakers, and academics—including U.S. Representative Barney Frank, AFL-CIO president John J. Sweeney, and rights advocate Urvashi Vaid—offers a spirited assessment of the challenges faced by lesbians, gays, and other sexual minorities on the job. Although mainstream gay rights organizations have tended to imagine their community as primarily middle class, an overwhelming number of lesbians and gays are working class, and many are already union members. Indeed, most of the progress made toward improved workplace conditions for gays and lesbians has been accomplished by rank-and-file union activists. Out at Work identifies the important parallels between the labor and gay rights movements and their shared work of foregrounding human rights, fighting homophobia, and embracing the full range of sexual expression. Through case studies of organizing efforts and more broadly political approaches, the authors call for both movements to reexamine their priorities and practices. There is much to be gained from a partnership between these movements, they conclude: for the gay rights movement, having the bargaining power of the trade unions behind them; for organized labor, a broader base of support. Contributors: Cathy J. Cohen, Yale U; Teresa Conrow; Lisa Duggan, NYU; William Fletcher Jr., AFL-CIO; Representative Barney Frank; Tami Gold, Hunter College; Yvette Herrera, Communication Workers of America; Desma Holcomb, UNITE; Amber Hollibaugh; Gloria Johnson, Coalition of Labor Union Women; Tamara Jones; Heidi Kooy, Exotic Dancers Union; Andrew Ross, NYU; Van Alan Sheets, Pride at Work; Nikhil Pal Singh, U of Washington; John J. Sweeney, AFL-CIO; Jeff Truesdell, Orlando Weekly; Urvashi Vaid, National Gay and Lesbian Task Force; Riki Anne Wilchins, GenderPAC; and Kent Wong, UCLA.

Read NOW DOWNLOAD
Today there are numerous websites designed for able to see Out At Work: Building a Gay-Labor Alliance (Studies in Classical Philology): Building a Gay-Labour Alliance files or online reading on-line, this website is one. You do not always need to pay to observe free kindle. We have now shown the best Books around the world and acquire it that you should view and download it free of charge. We have a great deal of files directories able to view and download in almost any formatting and quality